The True Beauty of Hospice 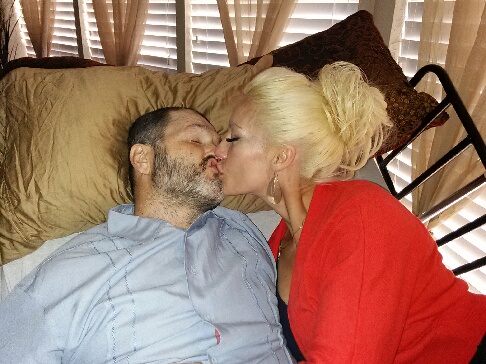 When I first met Tara, instead of shaking my hand, she jumped out of her chair, a big smile on her face, and said, “Oh no, I’m a hugger!” I laughed and remarked that, considering my profession, I usually do not receive such a warm welcome when I meet someone for the first time. Little did I know that our conversation would set up a story written one beautiful, cherished, moment at a time, by a family who refused to stop smiling, even in the face of death.

Tara’s husband Bill was 51, and he was dying of a rare cancer that was affecting his brain, and left him paralyzed on one side. When we met, they had just made the decision to go home from the hospital. As we talked about the couple’s decision, Tara made it very clear that they were not going home from the hospital to die, they were going home to live. She talked about how they longed to do the simple things, like playing board games, eating as a family at the dinner table, and having free time to just be together, instead of spending time juggling doctor’s appointments and chemo treatments. She talked about the upcoming milestones: her birthday and their anniversary, and that Bill, her husband, desperately wanted to take her out to Morton’s Steak House for one last date night. This was one of his last wishes, and they were both determined to make all of these things happen, and to enjoy every moment that God would grant them together, leaning on their faith along the way.

As we talked, Tara laughed and she cried; I answered the really tough questions when she asked, and I explained to her all of the things that hospice could do, to help her, her beloved husband, and their children, through this trying time. As the conversation came to an end, she embraced me in another warm hug, with tears in her eyes. This time, they were tears of relief and happiness, knowing that she would have a whole team standing beside her and Bill. She said she didn’t know hospice was about living, and she felt 100% better about the upcoming weeks, because she was no longer afraid.

Legacy projects, final wishes, symptom management, and a whole lot of support would be our top priorities. Though we cannot erase the pain of a loss, hospice most certainly help our patients and their families find the joys in these final weeks. To make this possible, we put together a team which consisted of, among others, Nelson, our RN Case Manager, Beth, our Volunteer Coordinator, Rita, one of our amazing volunteers, Amanda, our Social Worker, and Ron, our beloved Chaplain. 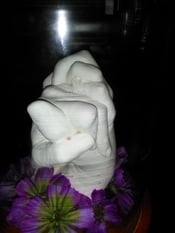 ur wonderful team was able to help make so many of the family’s dreams a reality in these last precious months. The family was able go to Six Flags on the kids’ spring break; our team made sure that Bill’s pain and nausea were under control, so that the couple could focus on their beloved children, ages, 4, 8, and 15. Our volunteer Rita spent hours with Bill, making cards and gifts for birthdays, anniversaries, and other milestones for Tara and each child. Rita wrote all the messages, and he signed each one with a fingerprint. They also worked together to record videos, so Bill could share special messages with each family member. When it wasn’t possible to make a visit to Morton’s on Tara’s birthday, our team brought the grill, the steaks, and the service to the family! Beth and Rita also worked together to make a mold of Tara and Bill’s hands, making sure that their wedding rings were easily visible in the mold. The best part was that they were able to do this on the day of the couple’s 7th wedding anniversary, making this anniversary even sweeter for both of them.

After only a couple of weeks on hospice, Tara told me how Bill looked better than he had looked in the year since he was diagnosed. She was amazed at how well controlled his pain and nausea were, that his hearty appetite had returned, and that he was eating again. She said, “This is the best quality of life he, or I, have had since he was diagnosed!” She went on about how nice it was to no longer run from doctor to doctor or be stuck in the hospital, and that since Bill had stopped chemo, he was more like his old self again, and they were having the time of their lives. Bill was mostly just happy that Tara was no longer chastising him for eating M&Ms and Snickers bars! Their love for each other was evident in their playful banter, the way they looked at each other, and the way they cared for each other.

On the day after Tara’s birthday, Bill was moved to our inpatient care center, because he wanted Tara and the kids to have nothing but happy memories of the family home that he custom built for them, and not remember it as the place where Bill took his last breath. His symptoms were also progressing, and we knew he would be more comfortable in the IPC.

While caring for him, nurse Nelson had discovered that just like him, Bill had spent quite a few years as a volunteer firefighter in a nearby town. After checking with Tara, I called in a favor to my contact at Dallas Fire-Rescue, who also happens to be my dad. I asked if he could bring his crew and fire engine to the IPC, to lift everyone’s spirits. on Saturday after Bill arrived. He happily agreed, saying, “Once a firefighter, always a firefighter.” When an injury prevented him from coming himself, one of his lieutenants quickly agreed to bring his battalion instead. 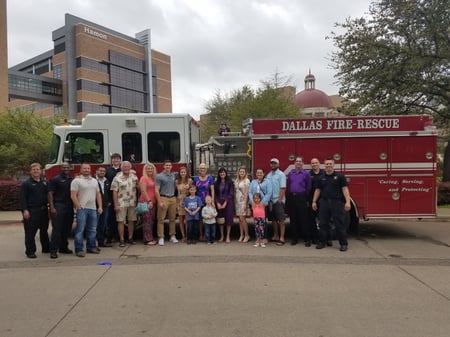 On their last Easter Sunday with Bill, and with Tara’s entire family also present, four Dallas Firefighters surprised Bill in his room at the IPC, and presented him with an official DFR T-shirt and hat, that had been issued to my dad, but never yet worn, and donated by him: “From one brother to another.” Each firefighter took Bill’s hand, offering caring words of encouragement and prayer, letting him know that he was still very much part of their firefighter family.  They handed out the Easter baskets, took pictures, and for the grand finale, everyone followed them downstairs to Fire Engine 55 to get the VIP tour and, 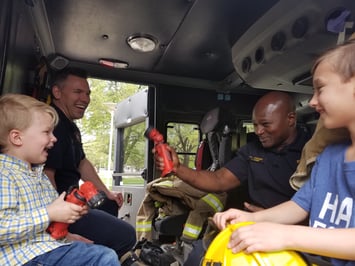 of course, put on the fire helmets and play with all of their cool tools/toys. The smiles were priceless. Even the smiles of the firefighters were indicative of how much the experience touched their hearts. Lt. Barbeau, the officer in charge of the A shift crew that came out, has since expressed that they were all very moved, and very blessed to have been a part of this moment.

A few days later, our Music Therapist, Rachel, visited Bill and Tara on the unit. She asked which song they would like her to sing and Tara replied, “Amazing Grace,” as it was one of Bill’s favorites. He was mostly sleeping by this time, but as Rachel, Carrie (one of our many amazing IPC nurses), and I sat in there, Bill began to sing along to some of the words, even though he never opened his eyes. We all eventually chimed in to finish out the song, which would be the last song they would sing together. When the song was over, Bill puckered his lips toward Tara to steal another kiss, and another beautiful moment was completed.

As Bill lay unresponsive in his bed, surrounded by family both past and present, with long-strained relationships having been healed through this last stretch of his journey, I spoke with Tara in the hallway for a few more moments. She could not say enough about how amazing all of our staff, both at home and in our IPC, had been to Bill, her, and her family, and how her perspective on hospice had drastically changed. As is usual for her, 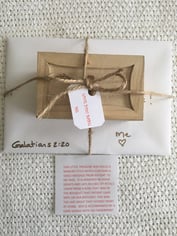 she smiled through her tears and with the utmost gratitude and appreciation she said, “It hasn’t been about death at all, it really has been about living every moment. As hard as it is to lose him, hospice has made this beautiful, and I never thought this could be beautiful.” She hugged me again, and we both laughed and smiled as we thought about what had happened over the past few months.

Bill’s memorial service was Monday, April 16, and began with the singing of Amazing Grace. Many of our staff attended, including Ron, Nelson, Beth, Rita, and myself. When we approached Tara to give our condolences, she enthusiastically threw her arms in the air and around us, with that huge contagious smile of hers on her face. Nearly the first words out of her mouth were, “Can you believe that this man (Bill) had flowers delivered to me, from him, at his own funeral?!” This time, it was Bill’s turn to surprise us. Even from beyond, he was making sure that Tara, and the rest of his family, knew that not only was he very much still with them, but that he loved them in such a way that even surpasses death. In seeing his last gesture of love, the tears started to flow before the service had even started. And that is the true beauty of hospice.

About the Author: Jennifer Hargrove is a Clinical Nurse Liaison for ACCENTCARE'S Hospice & Palliative Care in Dallas, Texas, working at our Texas Health Resources Inpatient Unit.