As Earline sat on the brown leather couch that was still smooth from years of use by a loving family in her home, she felt an excitement tingling from her from her toes all the way to her fingertips as she began to delicately strum the strings of her new ¾ Acoustic Yamaha guitar. If you had asked her a few months earlier if she would be there sitting in her home performing again, she would have laughed at you. Nearing the end of her life after being diagnosed with blood cancer, she thought the days of singing for a crowd were a part of her past.

When Earline became a patient with Seasons Hospice of Maryland, she began music therapy sessions with Music Therapists Kelly and Lissa. In their first visits, Earline always admired Kelly’s guitar and wished she had one just like it. She had a passion for music and a rhythm in her head that she needed to get down on paper. Kelly and Lissa contacted the Seasons Hospice Foundation to grant Earline a very special wish- a guitar like Kelly’s of her own! While they were working on this special surprise, Earline took a turn for the worse and was admitted to a Seasons Hospice inpatient center. Kelly wasn’t sure if Earline would return home so she didn’t wait on presenting her with the guitar right in her inpatient center room. Earline was astounded at the gesture and immediately tried to strum a few chords right in her hospital bed.

Earline did in fact, return home. The Seasons Hospice inpatient center was able to manage her pain and get her symptoms under control.

During one of her music therapy sessions, she expressed that she missed the days of performing in coffeehouses and open mic nights. The Seasons team sprang to action to create an afternoon “coffeehouse” in Earline’s home. Her friends and family came together to hear the original songs she had been working on. 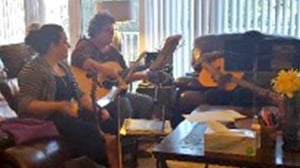 Even though she had performed for hundreds of people over the years, that day felt different for Earline. It was the last time she would perform for an audience and she wanted to make sure it would be one they would remember! With her close friends, family, and Seasons team by her side she opened her mouth and the words came out loud and clear. It was now her time to shine and share her gift once more. Even though she was nearing the end, Earline came to life again when she was performing and having her friends and family join in on her songs. She made sure everyone participated in some way either by singing or playing an instrument. It was truly a party and an afternoon filled with joy, laughter, and music that Earline and her family will never forget.