Music therapy can be such a powerful instrument to bring joy and peace to our patients, or to soothe and calm during agitation or restlessness. Even if you’re not a music fan, hearing a familiar old tune can bring back memories that have been long gone. But if you’ve been a musician yourself, you can only imagine the enjoyment that a musician coming over and playing your old favorites to you may bring.

Our patient Joe in Las Vegas was quick to share with our team that music had always been one of his passions. In fact, in the early ‘60s, Joe was part of a male quartet called the Castells. When our music therapist Carrie started paying Joe visits, he was eager to share everything about his old music group, especially once he learned that Carrie was in a group of her own with her husband Michael. Michael is a music companion volunteer with Seasons Hospice, and he started to accompany Carrie on some of her visits to Joe so the trio could make music together.

Joe’s band the Castells formed out of a high school in 1959, and signed with several recording studios in the early ‘60s. They created two albums, and had multiple songs that reached the Billboard charts. You can find them now on YouTube and Spotify; take a look at the bottom of this post to check them out! However, to Joe’s lasting regret, the group ended up disbanding in 1964, and a life in the music industry was not in the charts for Joe. 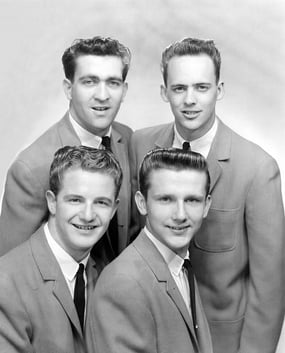 The music that Carrie and Michael have been sharing and creating with Joe has meant a lot to him, not least because Joe’s terminal diagnosis (Chronic Obstructive Pulmonary Disease) means that Joe often has a difficult time breathing. Not only have the duo’s visits brought back good memories and relaxed Joe so that his breathing was easier, but it also brought some much-appreciated companionship to his life, especially since he began to form a special bond with Michael.

As Joe shared about his life, both past and present, our team learned that one of the most important things in his life was his adopted granddaughter Kimberly, who was about to graduate from college. He was looking forward to attending to cheer her on, but unfortunately his plans fell through, and he had no one else to take him. When our team learned this, we had to put our heads together to see what we could do, and Carrie and Michael volunteered to take Joe!

Taking Joe safely to and from the downtown Las Vegas graduation entailed a lot of planning and preparation, and our team was determined that both Joe and his escorts would be well provided for. Joe hadn’t gone outside in several months and would be reliant upon oxygen tanks, so we secured the tanks and made sure that Carrie and Michael were formally trained in the usage of them, and also got a wheel-chair accessible taxi.

It ended up being a seven-hour day for the trio, but Joe was a trooper! He experienced some shortness of breath when they first departed for the ceremony, but once he was able to sit down and watch his granddaughter cross the stage and then greet her afterwards to give her her card and gift, he was remarkably peaceful and restful and his breathing was very calm. 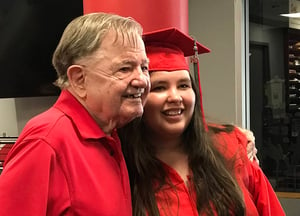 Not only did taking Joe to Kimberly’s graduation help fulfill one of his wishes, but incidentally it was the means of fulfilling another! We thought that Joe’s story was so cool that we wanted to share it with others, and he was so excited at the idea of being on the news that we had to reach out to local news outlets. Not one, not two, but THREE news outlets wanted to do a story on Joe, and he was over the moon at this opportunity to share about his life and his old musical group the Castells. When Carrie came to check on Joe a few days after their trip and asked him how he was, he replied “I’ve had a great day again because I got to see myself on the news twice!”

Joe’s love for music and for sharing his passion truly inspired his whole care team, from nurses to social workers. We’re so grateful that he trusted us during this important time in his life and allowed us to be part of making new memories.